The most influential female climbers of all time

by Olivia from Hangar London

As a climbing coach in charge of our Hangar Women Rock classes in London, Olivia Anstee knows a thing or two about female climbers.

In our latest blog, Liv rounds up her picks for the most influential female climbers of all time. 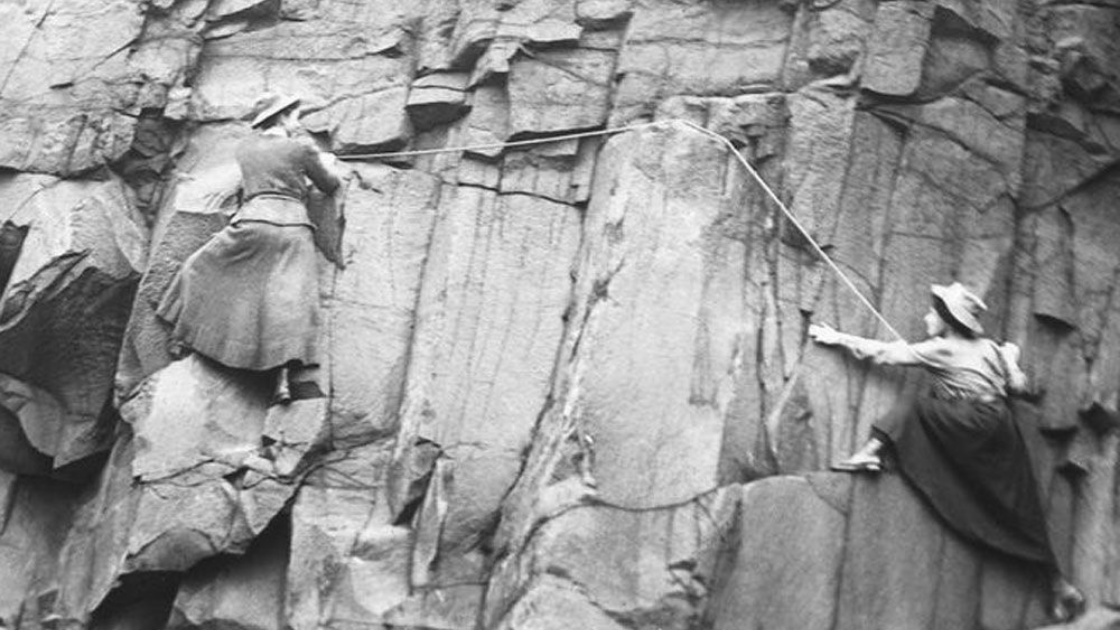 Lucy Smith and Pauline Ranken ascending Salisbury Crags, Edinburgh, wearing long, ankle-length skirts, hats, blouses and smart shoes, 1908. The only protection they had was a length of rope tied around their waists – no helmets, harnesses, spikes or other modern safety equipment as it wasn’t available at the time.

They formed their own club The Scottish Climbing Club, founded in 1908, after being barred from joining the men-only Scottish Mountaineering Club. It now has over 120 members (And counting) and is the oldest active climbing club exclusively for women. The club has sent numerous expeditions abroad and made the first all-woman climb of a major peak in the Himalayas. 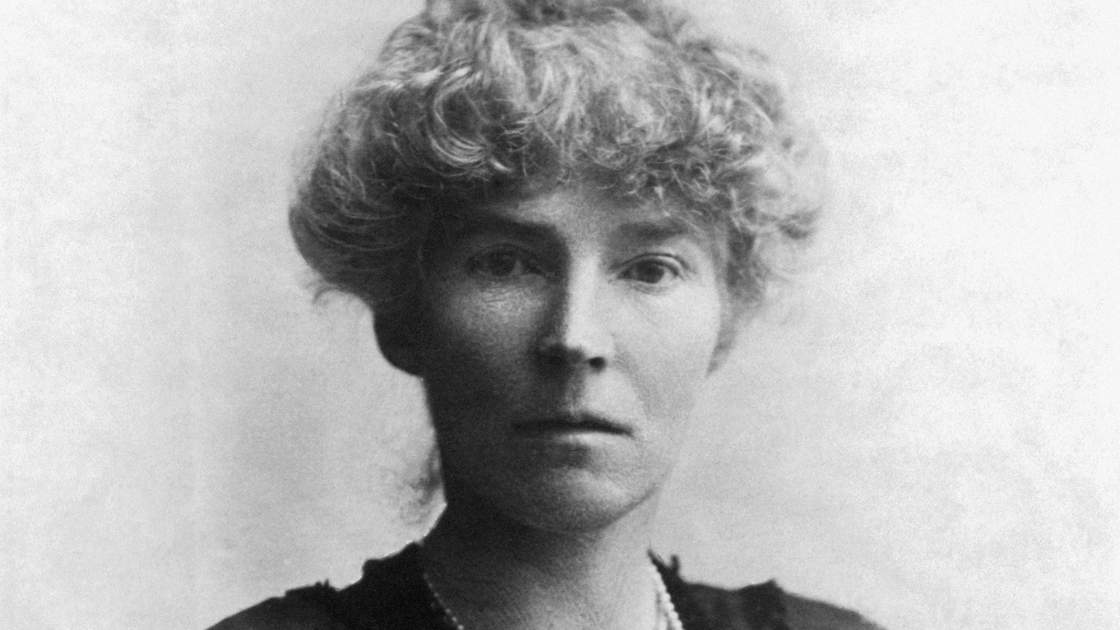 Whilst being technically a mountaineer, her inclusion is of the utmost importance. Bell was not only one of the world’s most impressive female mountaineers, but also an extraordinarily accomplished person in several other fields.

She was a particularly brilliant scholar in her time at Oxford University, a diplomat focusing on the Middle East, an accomplished archaeologist as well as a linguist. Her hiking adventures, however dwarfed they were by her academic achievements, were nevertheless formidable.
Bell spent 10 years travelling around the world in a time that women were often restricted to the confines of their homes, and was a leading Alpine mountaineer.
She was one of the first people to tackle mountains in the Engelhorner range, including Gertrudespite, named in her honour.

After a being caught in a treacherous blizzard in 1902, Bell’s passion for hiking was undeterred and she went on to summit the Matterhorn two years later. If you are keen to learn more about this fascinating explorer, there is also a wonderful film about Bell with Nicole Kidman as the Queen of the Desert. 😊 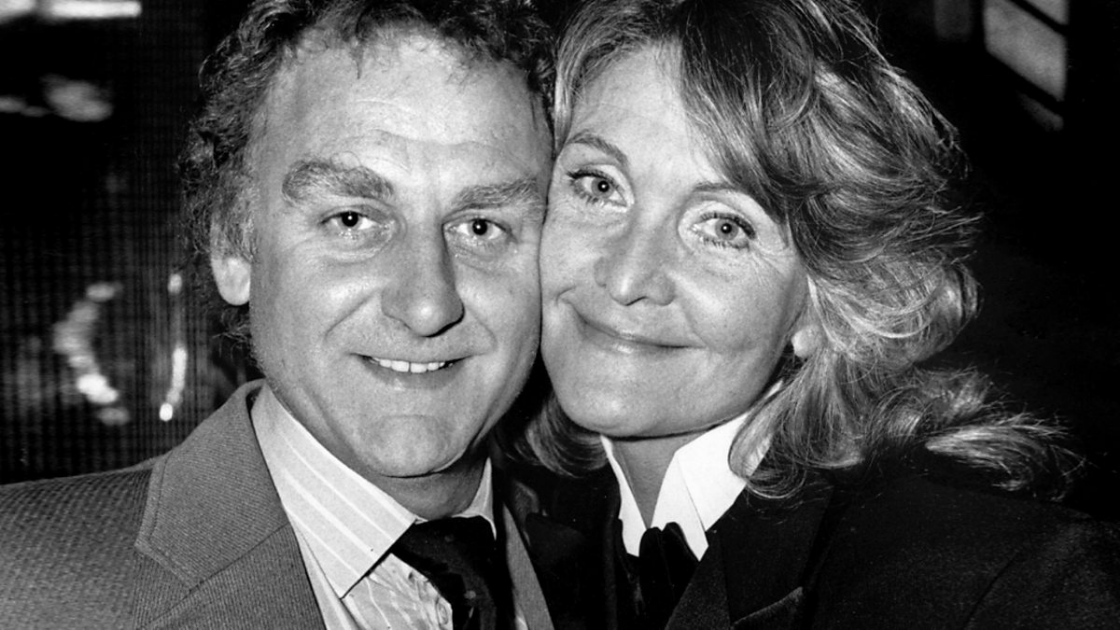 Again, whilst technically a mountaineer, I see her mention as a personal favourite. Hancock is not primarily known for her mountaineering prowess, but instead for her successful career as a theatre and TV actress.

When she was offered the role of the main character in “Edie”, a movie about a woman who climbs the daunting Mt Suilven at an age when most people are moving into retirement villages, Hancock was initially cautious.

To properly portray her character, Hancock buckled down to do just that, becoming the oldest person to summit the mountain at 83 years old. In addition to her acting and trekking achievements, Hancock has also written three best-sellers. As a Dr Who fan, I personally recognise her from the 7th Doctor series with Sylvester McCoy in “The Happiness Patrol” episode where she played Chief KillJoy of The Happiness Patrol, with the iconic Kandyman villain. 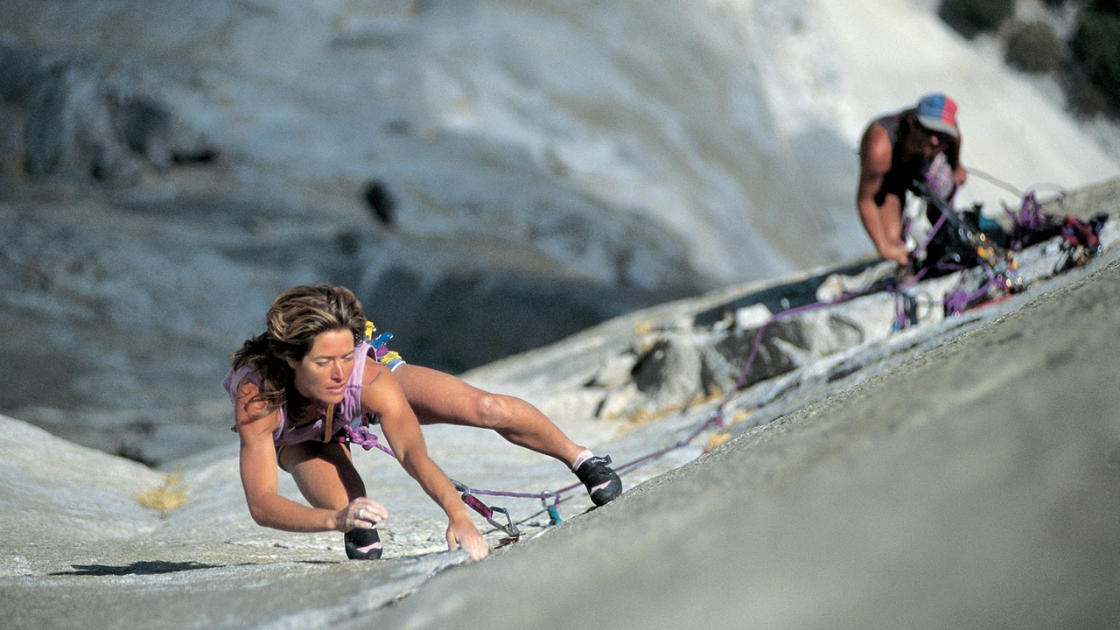 Hill was a gymnast early in life, nearly broke a world record lifting weights, and ran competitively. She took to climbing at a young age, showing a natural aptitude for the activity, and became a part of the climbing community

Hill was a free climbing pioneer during the 1980s to the 90s. She started climbing at the age of 14 and was soon setting world records in an era when female climbers were catching up their male counterparts.

Hill is known for completing the first ever free ascent (of both sexes) of the sheer rock face of The Nose on El Capitan, Yosemite in 4 days in 1993 and repeating the achievement the following year in under 24 hours.

This accomplishment was way ahead of its time in the history of rock-climbing and drew international attention to the sport. She has been described as both one of the best female climbers in the world and one of the best climbers of all time and has headlined many climbing festivals on a number of occasions. 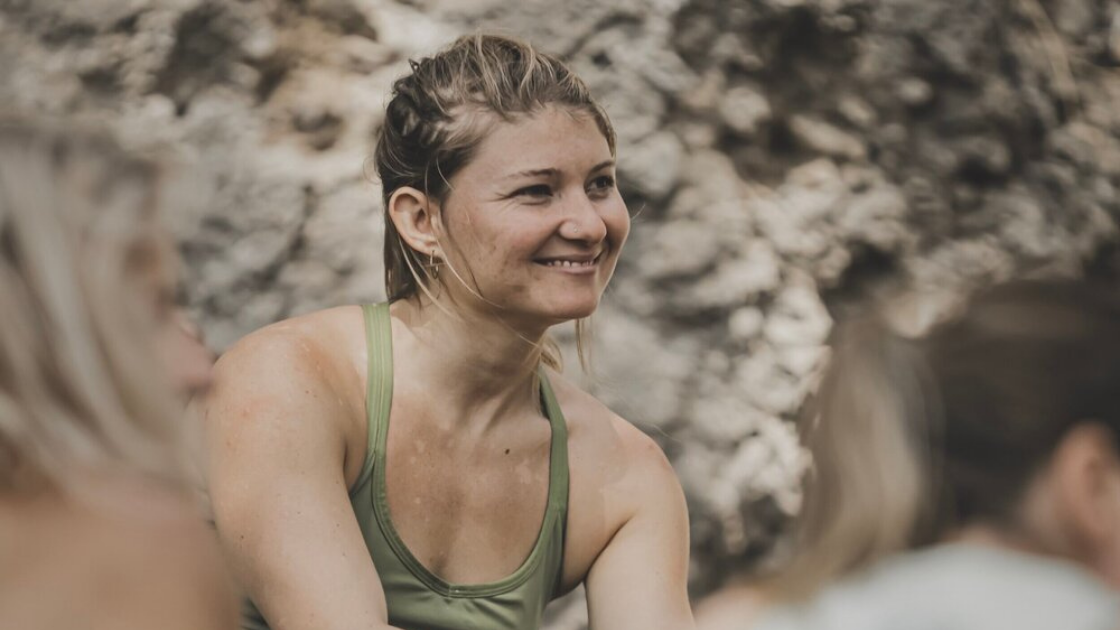 Findlay has established herself as a traditional and big free wall climber, and has been called the Best Female Mountaineer in Britain. She became the first female, British climber to successfully scale an E9 graded route and the first to climb a route graded 8c/5.14b. She was the first British woman to free climb El Capitán, has done so four times on four different routes. She made the first female ascent of Golden Gate in 2011, the first female ascent of Pre-Muir Wall in 2012, and an ascent of Freerider in only three days in 2013. In 2017 she free-climbed the Salathé Wall.

Climbing magazine gave her their Golden Piton award for trad climbing in 2013.  A well-deserved admiration I believe. 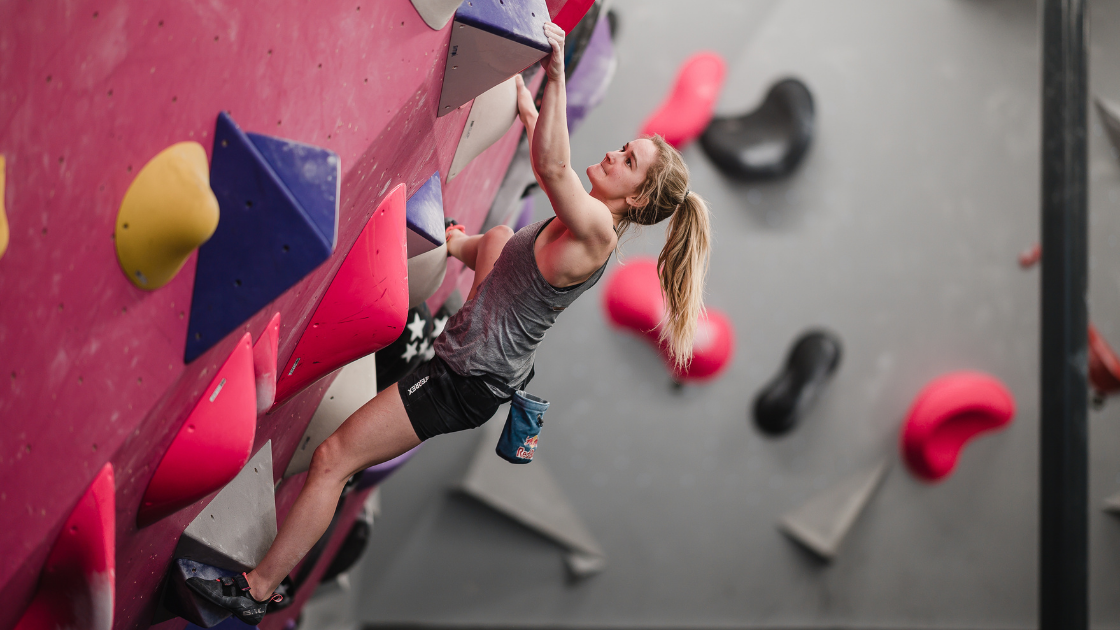 My personal favourite on the list, The Climbing Hangar’s very own Shauna Coxsey is a force to be reckoned with and one of the most successful competitive climbers of all time. She began climbing in 1997 at age four, inspired by a television broadcast of Catherine Destivelle climbing in Mali. Coxsey is mainly active in competition climbing and has participated in several international competitions in bouldering. She has won the British Bouldering Championships on multiple occasions. In 2012, she won the 9th edition of the Melloblocco and placed 2nd in the World Cup stages in Log-Dragomer and Innsbruck. She finished third in the 2012 Bouldering World Cup. In 2013, she cleanly ascended her first problem graded 8B (V13) when she climbed Nuthin' But Sunshine in Rocky Mountain National Park. She was appointed one of the UK's first British Mountaineering Council Ambassadors. In 2014, she placed 2nd overall in the IFSC Bouldering World Cup, and 4th at the Bouldering World Championships in Munich. The same year, she became the third woman ever to boulder 8B+ (V14) when she topped New Baseline in Magic Wood near the Swiss town of Chur. In 2015, she won the British Bouldering Championships in Sheffield and took 1st place at the Bouldering World Cup in Munich.

Coxsey was appointed Member of the Order of the British Empire in the 2016 Birthday Honours. In late 2016, she suffered a shoulder injury which prevented her from competing in that year's Bouldering World Championships, despite topping the overall rankings in the Bouldering World Cup. She won four IFSC Climbing World Cups in Meiringen (SUI), Kazo (JPN), Innsbruck (AUT) and Sheffield (UK). At the World Cup in Munich (GER) she placed 2nd. In 2017, she again won four Bouldering World Cup stages, in Meiringen (SUI), Kazo (JPN), Mumbai (IND) and Vail (USA). In Munich (GER) she again placed second and secured the overall 2017 title. In August 2019, she won two bronze medals at the 2019 IFSC Climbing World Championships in Hachioji, in bouldering and the combined event. During the finals of the combined event, she set a British women's speed climbing record of 9.141 seconds, securing second place in the speed component of the combined event. Additionally, by reaching the finals of the combined event, she secured a qualification spot for Tokyo's 2020 Summer Olympics. 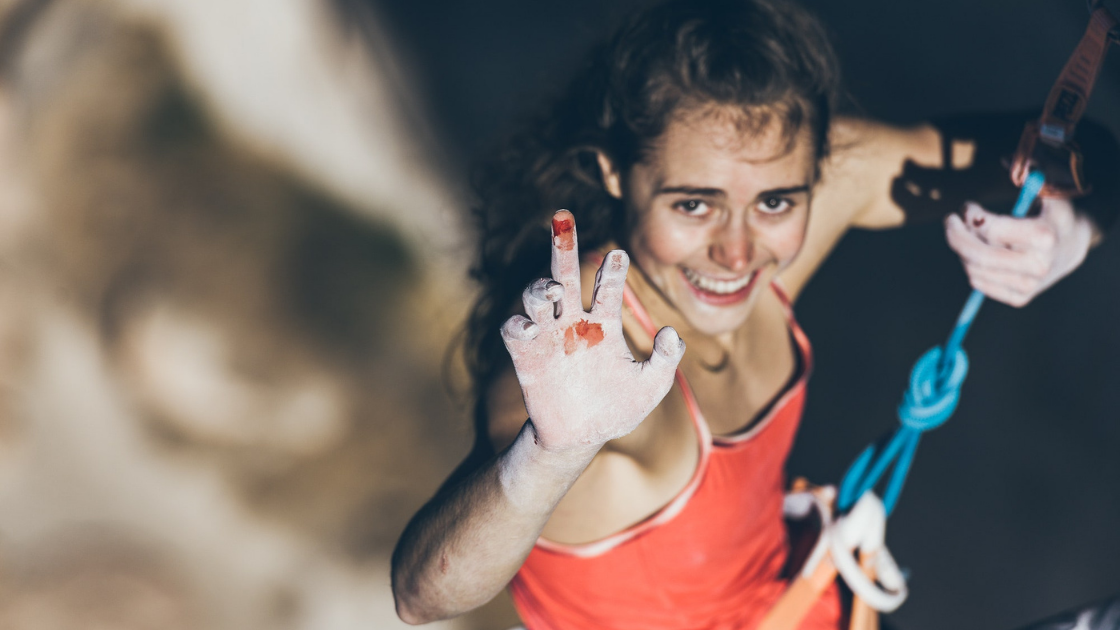 Margo Hayes set the record for the highest grade climbed by a woman at 9a+ (5.15a) on La Ramba in Spain, February 2017. She held this record for nine months after being pipped by Angela Eiter.

Hayes was originally trained as a gymnast, and competed on a national level at the age of eight. After finding her passion for climbing at 10 years old, Hayes joined Boulder’s Team ABC.

Before her historical ascent of La Ramba, Hayes attempted the climb 17 times over a week, proving to everyone what hard work and perseverance can accomplish.

To celebrate, Hayes followed her record-setting send with a send of Realization/Biographie. 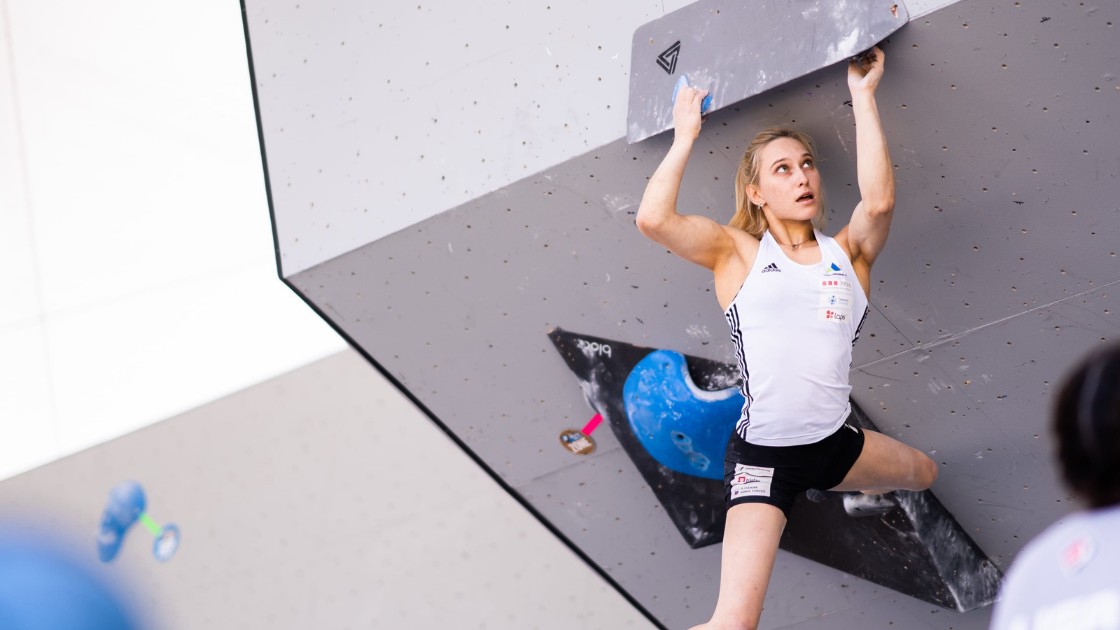 Garnbret won her first international title in the lead competition of the 2014 World Youth B Championships. In July 2015, just after turning 16, she started competing in the senior category of the Lead Climbing World Cup. Since then, she participated in 31 Lead Climbing World Cup events, missing the podium in only four of them.

My most memorable achievement of hers was when she was competing in semi-finals of the first stage of the Lead World Cup 2019 that took place at Villars, Switzerland. For some reason, her chalk bag fell off right at she started, before her first clip, but then climbed to the top without it. The only competition climber in history to do so without chalk. She was the only climber to reach the top and she went on to win by a fraction of a point in finals. 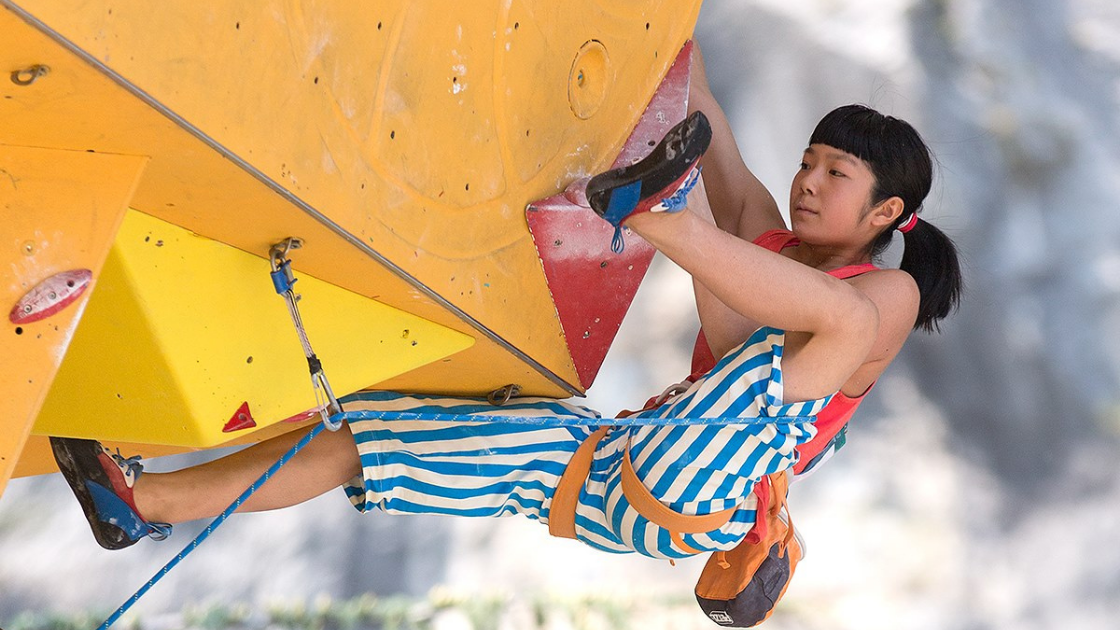 Shiraishi started climbing at the age of six at Rat Rock in Central Park, joining her father. Only a few years later, she quickly established herself as one of the top boulderers and sport climbers in the world, and is widely considered to be the best teenage climber regardless of gender. Her numerous accolades include first-place finishes in international competitions, and multiple first female and youngest ascents. Shiraishi is featured in several short documentary-style films, and is the subject of the documentary short "Return to the Red" (2012).

The New York Times referred to her as a "bouldering phenom". Outside Magazine described her as a "young crusher", and The New Yorker called her "a Gretzky of the granite". At age 13 she became the second female, and youngest person, to climb a sport route with a difficulty grade of 5.14d/5.15a (9a/9a+). In 2016, she achieved the second ascent of the Horizon in Mount Hiei, Japan (rated V15 on the Hueco scale) and became the first female climber to climb the grade.

Olivia has been a coach at The Climbing Hangar London for almost 6 years. She's our unofficial Women's Ambassador for the city. Before lockdown Liv was running Hangar Women Rock and Hangar Women rock Advanced for a few years. It was her love for instructing that initially got her into climbing, as she did an apprenticeship in Outdoor Activity Instructing, and started working at The Climbing Hangar at 20 years old.
Liv's favourite discipline is Bouldering, and she enjoys following the international competitions in Bouldering and Sport climbing. If you see her TCH London, say hello. She'll be happy to share any tips and tricks.

Our "Women Rock" charity t-shirt is available now. 100% of the profits are divided between two amazing female-focussed charities, Refuge and Black Girls Hike.

But the tee is only available until 30 April 2021, when the donation will be made and all purchases will be dispatched.