Refugees Rock is a free group climbing session hosted by TCH in collaboration with Action Asylum and the British Red Cross. Every month groups of refugees and people seeking asylum are invited by the two charities to climb for free alongside Hangar coaches, the charities staff, and “bouldering buddies” (our volunteers from within the Hangar community).

Learn more about the sessions below and discover how you can get involved.

Few of us are aware of just how tough life has been for people seeking protection in the UK and the arduous journeys they make to find sanctuary here. Then there is the waiting on a decision from the Home Office on whether or not they are allowed to stay here. With an allowance of just over £5 per day and no permission to work it is near impossible to maintain any quality of life at all, so much so that physical exercise and mental wellbeing become incredibly difficult to take care of. Knowing the benefits of climbing as we do at The Climbing Hangar, our mission is to make the benefits of indoor climbing available to as many people as possible. That’s why we’re working with Action Asylum and British Red Cross to roll out Refugees Rock sessions at as many of our venues as possible.

We’re working with Action Asylum and the British Red Cross to deliver monthly group climbing sessions called Refugees Rock where people from all backgrounds come together and have fun in an inclusive community, building relationships based on trust and a sense of belonging. Newcomers to the UK are invited to climb for free alongside Hangar coaches and volunteers from the Hangar Community… then grab free coffees and hang out together in a relaxed, welcoming setting. 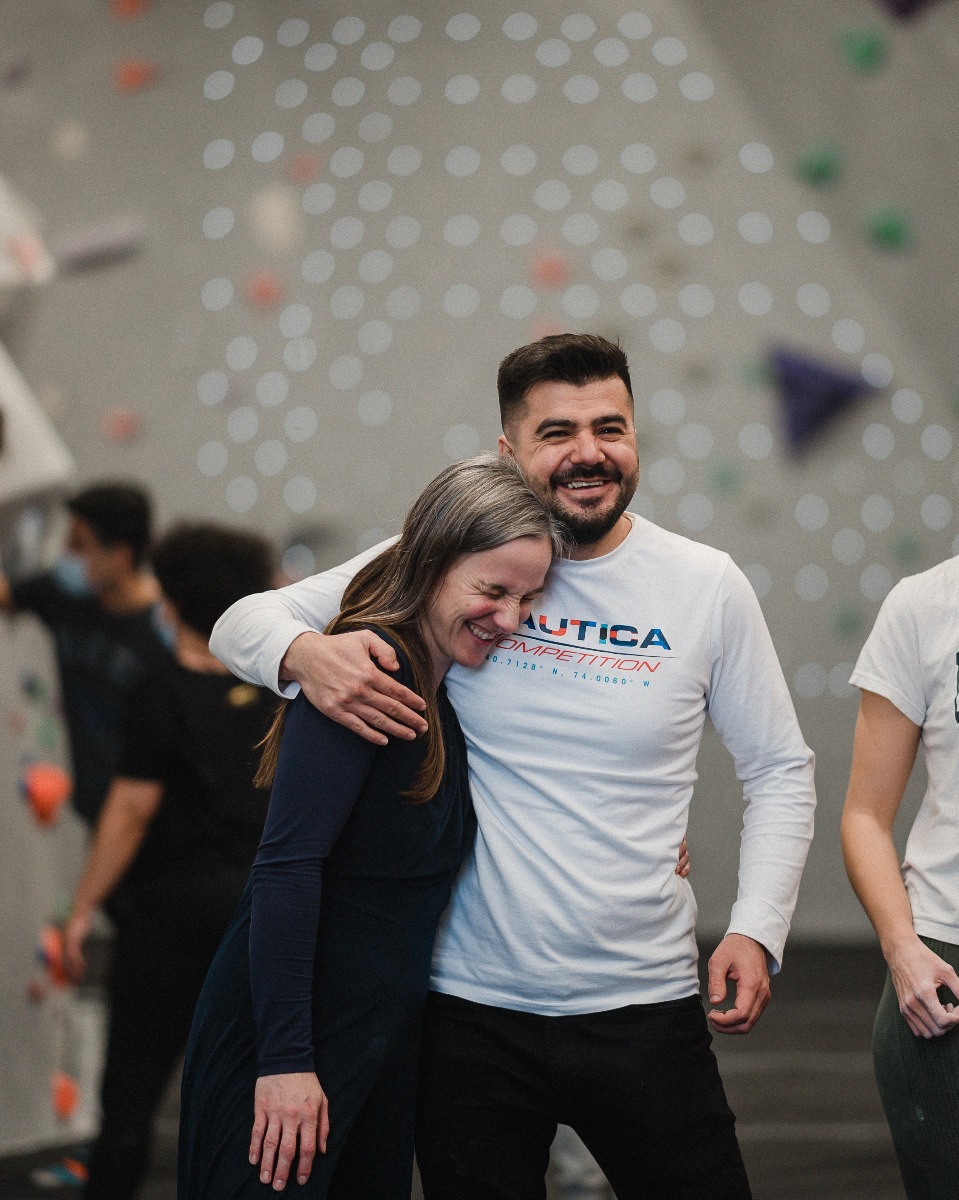 Rahim arrived in the UK in May 2020 fled his home country due to fear of being persecuted. In the summer of 2021, Rahim had been here for just over 1 year before he was invited to join Refugees Rock at The Hangar Liverpool Matchworks. This means Rahim had spent more than a year getting by on minimal resources to improve his life, improve his wellbeing or meet like-minded people. Over the course of four visits to TCH, Rahim was able to train and make a bunch of new friends. He met all of the other participants during the sessions but is forming bonds that will last a lifetime.

“I had climbed a little back home and mostly outside, so when I was invited to join Refugees Rock I was so happy. TCH, is now is my favourite place to climb,” says Rahim, who has since been signed up to a free Hangar membership. “These visits did not only help me physically, but spiritually, and gave me the chance to meet lots of nice new people”.

The last time Rahim attended Refugees Rock in November 2021, he received a greetings card from his fellow climbers, and some Hangar goodies, to celebrate receiving his refugee status. The group cheered, hearing that Rahim now had his status. It was an emotional moment. Only now would he be permitted to find work, and begin to rebuild his life in the UK. 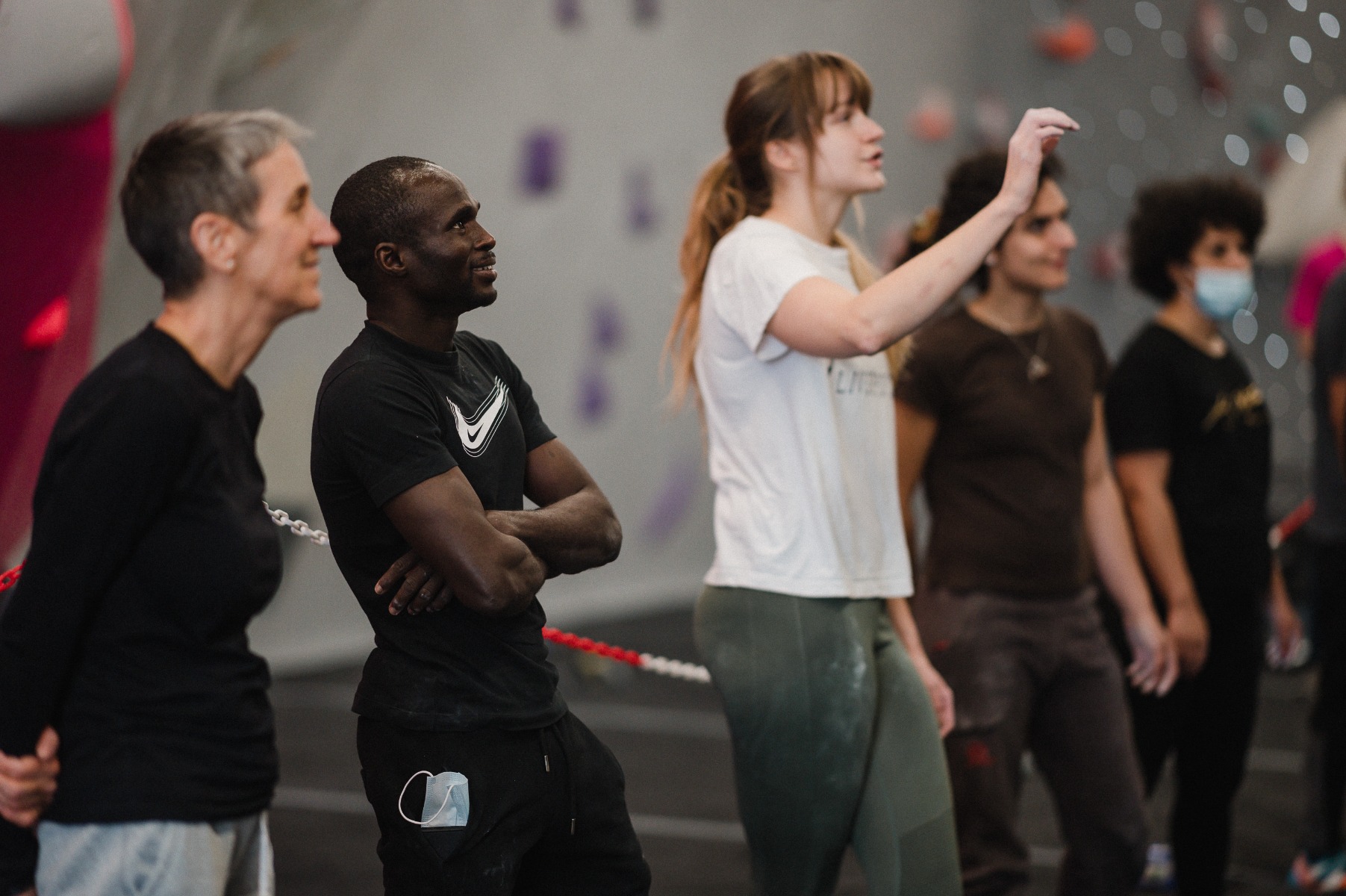 Helene Santamera, who works for the British Red Cross as Project Coordinator for Refugee Support, and is also a member of the Hangar says:

When I heard that Emma Leaper from Action Asylum and Jay Railton from TCH had set up this project back in May 2021, I jumped at the chance to be involved. I could immediately see how much this sport could help the people we support. After almost 15 years in the legal sector as a Refugee and Human Rights lawyer, I have listened to some of the most unimaginable stories of human suffering. Having heard first-hand what people go through made a climbing project with refugees so appealing to me. There is so much joy at the sessions, so much support, and so much laughter. It's a community!

It's hard to pick favourite moments - one for sure is when one of the young men turned to me with a look of awe on his face and said, "Helene, when I am on the wall, I am not thinking about anything else!" Imagine that! I also quite enjoy it when some new climbers come along and flash my projects. I mean, are you kidding me?! 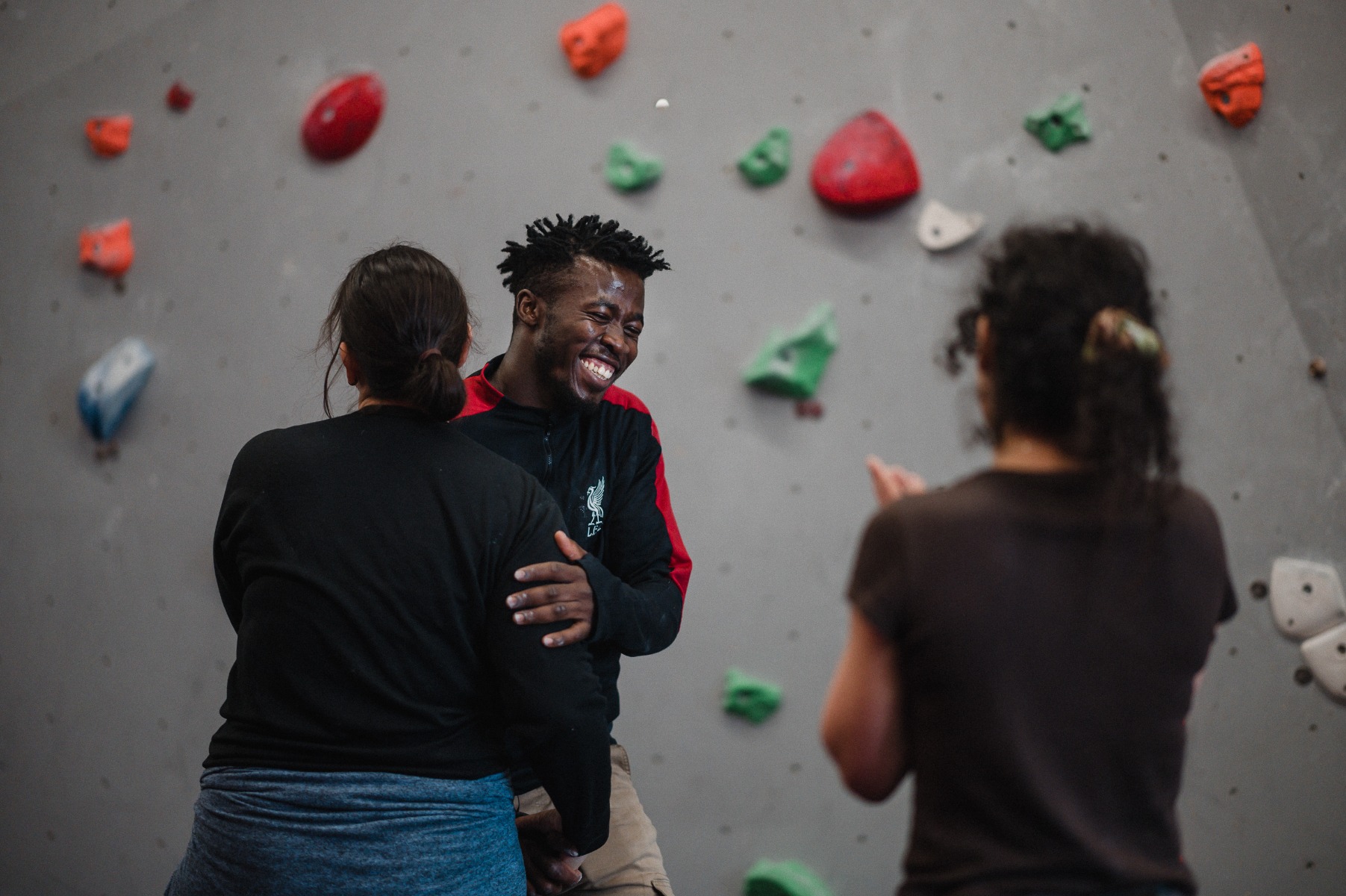 For more information on how the British Red Cross helps refugees in the UK click here.

‘Refugees Rock allows people seeking asylum to have some freedom from their daily worries, it’s Mindfulness in Action! These are people who have had to leave everything behind, sometimes their whole families, their friends, their profession, even their pets! Working as a Social Worker at Asylum Link, on a daily basis I see people struggle, but when we are at the TCH at ‘Refugees Rock’, I see people start to relax and their personalities shine through! I see people smile, make friends and cheer each other on, it’s powerful stuff!’ – Emma Leaper, Action Asylum.

Action Asylum brings together people seeking asylum with their local communities to volunteer and improve mental wellbeing. ‘We do a lot of conservation work. This year alone, volunteers have planted over 1000 trees and taken part in 5 Beach Cleans! It’s great to be out in Nature and doing something useful to protect the Environment!’

How to get involved

There are various ways for Hangar customers to support Refugees Rock. Like Rahim, our other Refugee Rockers will be receiving memberships therefore, we offer our customers the chance to buy suspended coffees, which means customers can pay forward a hot drink that will be provided to a refugee climber during their visit. You can also chip in for bus passes! But that’s not all.

Customers can even volunteer to attend Refugees Rock as a “bouldering buddy”. There’s no need to be a qualified coach. You’re simply there to have some fun, hang out with new friends and help the Hangar to provide a warm welcome to participants. We’re also working on some branded Refugees Rock merchandise to raise funds for Action Asylum and the British Red Cross. So, stay tuned for more on this.

At the moment, Refugees Rock is only up and running in Liverpool and Sheffield, but we aim to roll the sessions out at all Hangar venues. So no matter where you climb, you can register your interest or find out more via the button below: