We all experience major setbacks at some point along our climbing journey, and if you’ve ever wondered ‘how do we deal with and overcome those setbacks?’, you’re in the right place. Liverpool Sandhills Hangar crew member, Max Prescott, shares his own experiences about recovering from a broken ankle and getting back to climbing, as well as some valuable lessons which he learnt along the way.

Last April, I broke my ankle skateboarding. Two months later, I managed to send Picnic Sarcastic (7a+) one-legged at The Bowderstone in the Lake District. I was very proud of that achievement, not just because of the grade, but also because it represented what I was still capable of despite having broken my ankle.

My parents bought me a skateboard for one skateboarding lesson I had when I was younger, but that about summarises my history with the sport. I thought it would never be used again. However, we were just beginning to ease out of the third lockdown, and my friend and I sought to cure our lockdown fatigue with a trip to the local skatepark. I dusted off the old skateboard and we hit the ramps. We’d only been there twenty minutes, and I thought the next progression would be to drop in on a (small) half-pipe… I think you can already see where this is going to go wrong. I had the skateboard hovering over the edge of the ramp, and after one deep breathe, I thought ‘F*** it’ and leant forward. But my instincts betrayed me, I immediately recoiled, sending the skateboard flying and landing in an awkward heap on my right leg. I knew it was broken immediately. Picture 1 shows the scene when the paramedics arrived.

I broke two bones in my ankle and ruptured my deltoid ligament, meaning it was an unstable ankle fracture and would require surgery (see Picture 2). I was told it would be a good outcome if I could walk again without pain. The first two weeks were all about managing pain, resting, and keeping the ankle elevated to reduce the swelling for the surgery. After the surgery, the following two weeks were much of the same until the cast could be removed. Essentially, I would spend the whole day in bed only getting up to make food or go to the bathroom.

The injury took its toll on my mental health. I was on strong painkillers which made me feel completely out of it, and so it was difficult to focus on anything. The accident also happened three days before climbing gyms were due to open. I was so excited, but instead I had effectively created my own fourth lockdown. Furthermore, I am normally quite an active person and I love to be outside. Being stuck in bed all day was perhaps the worst thing possible for my mental health. All the meantime, I still had to finish off a remote placement with the Environment Agency, work on my dissertation, and search for jobs.

But I had just been through a very traumatic event, I knew I wasn’t going to be having the best time of my life. I think this is where the phrase ‘it’s ok to not be ok’ really stuck with me. I prioritised finishing off my placement with the EA and got an extension on my dissertation. I think this is something I have learnt over the years; we can always be a little bit kinder to ourselves. That means different things for different people, but for me it meant prioritising my workload to find more time to do things that would cheer me up, and changing my expectations around my productivity and wellbeing.

Making the Most of My Situation

I was told by the doctors that I might not be able to walk again without pain, which is a possibility I had to come to terms with. However, I knew that I would do everything in my power to ensure the best possible recovery. Four days after the surgery, I began to do what exercise I could. I did my first set of pullups since the accident (I thought my heart was going to beat out of my chest from being so unfit!), and I started doing daily grip strengthening exercises and core workouts. As my confidence grew, I began to do more rigorous workouts, and two weeks after the operation, they removed the cast and stitches.

My God that was a huge relief! I looked at what was once my lower leg, but had become a skinny, stiff, alien-looking object attached at my knee. My calf had wasted away to the extent that my foot looked like it belonged to a hobbit (i.e. disproportionately large and swollen). But at least I could now start doing ankle mobility exercises, which I did four times a day, and gently weight bear in a moon boot. This allowed me to do more complex workouts, and after a week, I felt confident enough to go for my first climb since breaking my ankle.

During this period, a little bit of resilience and a positive mental attitude went a long way. I knew I had to push my ankle for it to get better, and that meant my ankle was almost always in some sort of pain. I had to learn to judge the difference between good and bad pain. Additionally, I never lost hope. I had accepted that I might not be as able bodied as before, but I knew that no matter what I would still find a way to participate in the sports that I love. Campusing and climbing one-legged were both still a possibility; paraclimbers do it, Alex Honnold did it in Free Solo, so why can’t I…? 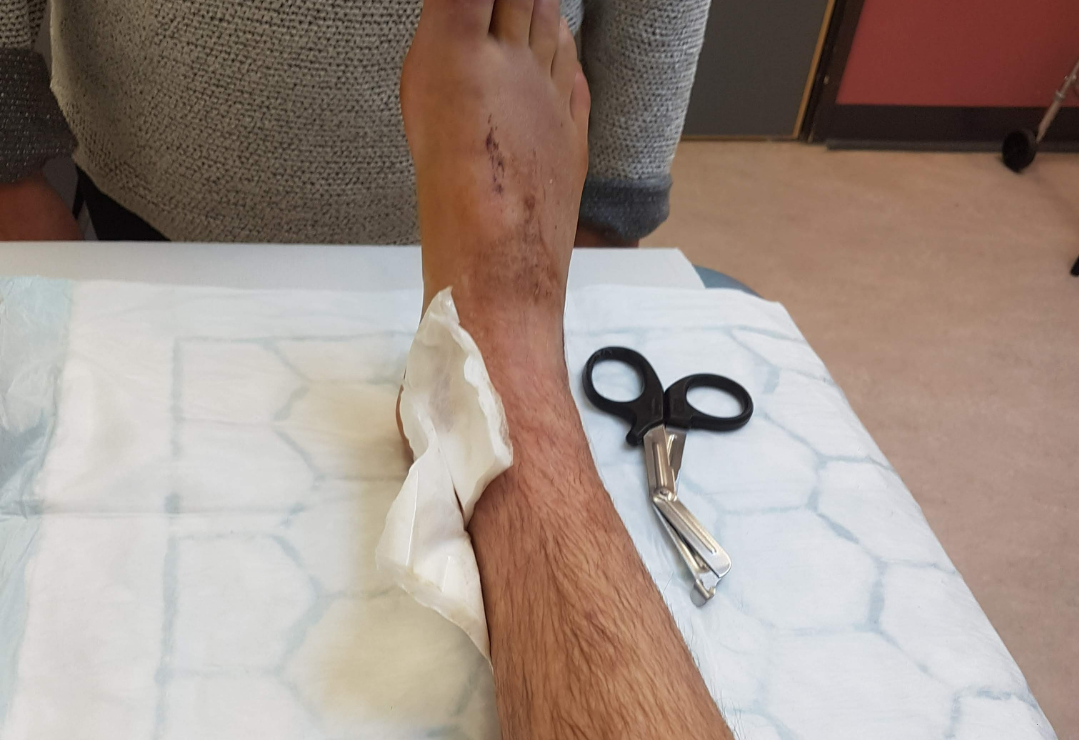 I still remember hobbling up to my first climb, I left my crutch at the bottom and pulled on. It felt like second nature, that was all the proof I needed to know that climbing would still be possible with this injury. Climbing was actually incredible rehab. Hobbling around on the mats got me up and moving around, but I could also easily rest when I wanted to. Climbing got the blood flowing throughout my body, including my ankle. And climbing with just one leg was excellent ‘cross-education’, which research has shown to have positive outcomes for neuromuscular and strength gains for immobile limbs. When I went to my next physio appointment, I had been spotted by one of their spies (other patients) climbing in the moon boot, and my physio had put two and two together to realise that must have been me. She didn’t seem too impressed, but I think I’m pioneering a new method of ankle rehab personally…

At first, I only climbed on overhands and stuck well within my comfort zone, only attempting climbs I knew I could easily do. I have been climbing for over 9 years now, and so for me this comfort zone was quite large. As I gained confidence, I began to push myself more and more, always making sure I would fall safely or have an option to bail. My one-legged exploits always attracted a lot of attention on the mats, and most people likely considered me a madman, but I knew what I was doing was safe.

I continued to climb one-legged throughout May and June, I even managed to go outdoor climbing in the Lake District during a family holiday. The descent down to St Bee’s was certainly a sketchy one… and the Bowderstone was the perfect terrain for a one-legged ascent of Picnic Sarcastic (7a+).

Off With the Moon Boot

At the start of June, I was ready to stop wearing the moon boot and took my first steps unsupported. I started doing regular physio exercises, going on short walks, and cycling. At the start of July, I started climbing with both legs again, which also proved to be a great low-impact exercise to improve range of movement and strength in the ankle. The difference in wear pattern between both shoes was quite noticeable! I continued to push my ankle as much as I could get away with, whilst also starting my job at The Climbing Hangar. I began to achieve more milestones, from completing my first park run to sending my first wood to going trad climbing outdoors.

However, at times, I pushed my ankle too far. I remember one particularly strenuous climbing session in October where afterwards my ankle felt a lot more tender, and a dimple appeared over the plate. I went to get it checked out and it was likely one of the screw heads rubbing against the skin. I had to take it easy for the next couple weeks.

Jump forward a few months and I am now climbing stronger than ever before. I’ve started projecting my hardest ever climb outdoors and have managed it in two halves! However, the plates continued to cause me irritation and so I have just had an operation to have them removed. That felt like the next step in my personal journey towards a full recovery (not everyone has them removed).

Learning to Live with My Injury

My ankle continues to affect me, and it is still on my mind on a daily basis. Two months before I broke my ankle, I had just run my first marathon. I have not felt confident enough to get back to running regularly, but this is something I hope to achieve again in the future. There is no doubt that recovering from major injuries, such as this one, takes time. Recovery does not happen overnight, but over the course of many years, and I still feel relatively early on in this journey. It is a powerful reminder that one moment has the potential to affect the rest of our lives.

But if I could go back, I would not change a thing. I have learnt a great deal throughout my recovery:

We all experience setbacks, especially as climbers, what’s most important is how we deal with and overcome those setbacks. And of course, make sure to keep smiling and appreciate the things you are still able to enjoy.

I am incredibly thankful for the support of my parents, for having an incredibly caring girlfriend who was right by my side every step of the way, and for the amazing NHS staff who looked after me and prevented this from becoming a life-changing accident.

P.S. You may have thought the title sounded a bit pretentious, but it comes from a hilarious encounter I had. My girlfriend, Sarah, had just had an operation on her toenail (I think we can all agree I win on the severity front) and so gave her own attempt at one-legged climbing. We were just chatting to some people on the mats, who said it reminded them of the “boot legend” who used to climb at Sandhills, not realising I was sitting right there!