Liverpool to Stuttgart Interview: Alex Waterhouse on taking on the pro's at ROCKSTARS

When Alex W headed to Liverpool in his van for adidas TICKET TO ROCKSTARS, he probably didn't think he'd be taking on the world's best just weeks later at the pro comp, and finishing in the TOP 10!

Now that he's back to reality, we talk to Alex about climbing in front of a packed arena, chilling with legends in the athlete's lounge and topping boulders that some of the world's most famous climbers didn't get.

Not a bad weekend all around. 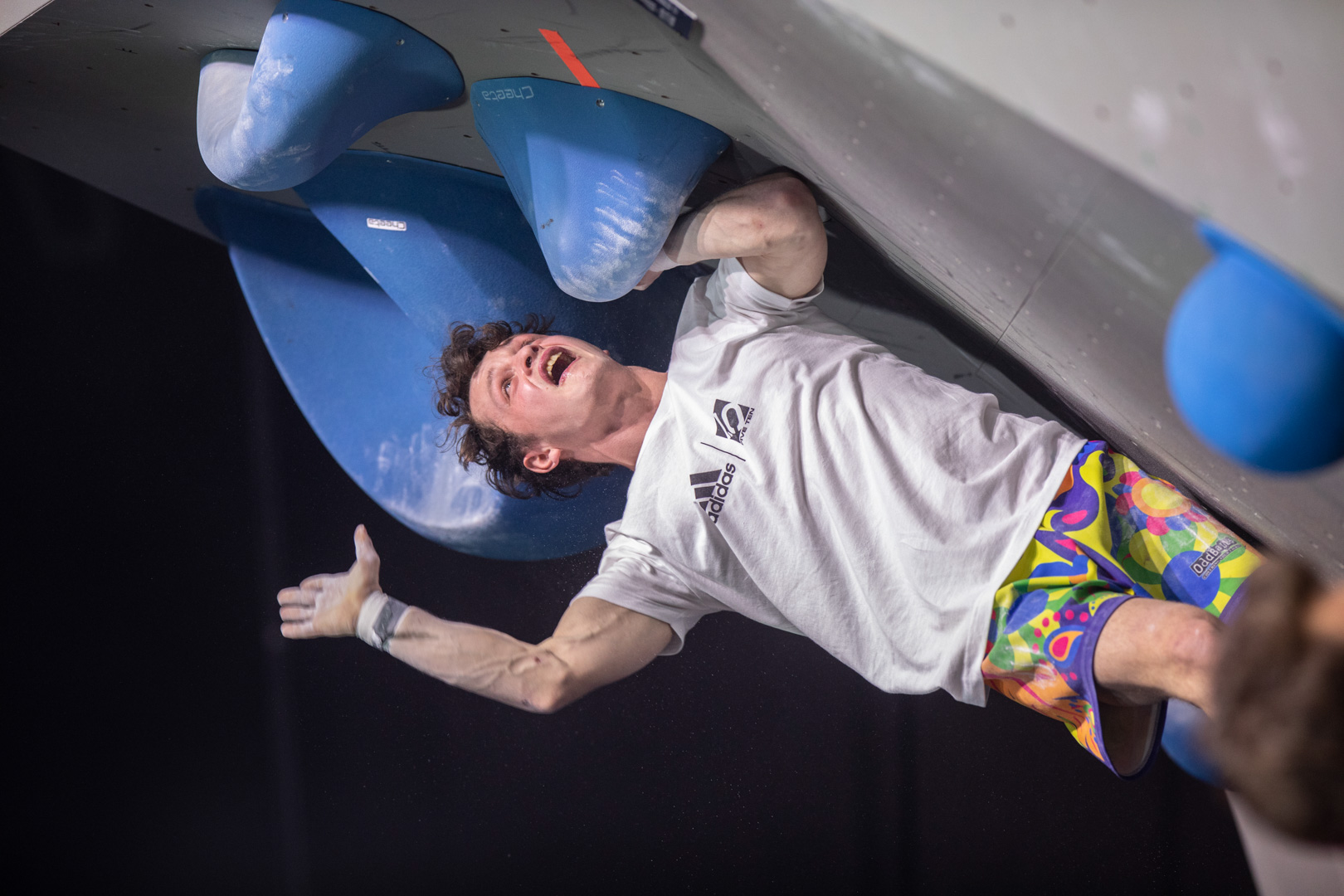 So how was Rockstars weekend? What was your favourite memory from the trip? Was there a particularly surreal moment?

My Rockstars weekend was genuinely incredible. There are too many good memories to count, but topping Men's Boulder 1 in the semi final is an experience that I won't forget for a little while. That and the post-semis kilter board session with the Hangar crew of course!!

One of the most surreal aspects of the comp was the thought and planning that had gone into the event. There were 5 physios on hand all weekend to give massages and tend to injuries. There were even special Rockstars do not disturb signs in the hotel rooms: "Do not disturb, Rockstar sleeping".

What was it like to be surrounded by the world’s elite climbers in the hotel and backstage in the athlete lounge?

To begin with it was pretty intimidating and I felt pretty out of my depth. It's a weird feeling being among your heroes. Fortunately, this was alleviated pretty quickly by hanging out with the British crew on the first evening and getting settled. From there it was just a little surreal, especially running into the big names at breakfast or in the athlete lounge between rounds.

Speaking of the athlete lounge, you warmed up alongside many of the world’s most famous climbers. How did their routines compare to your own?

One of the my big goals for the trip was to learn as much as possible from the other athletes and the environment, so I was careful to watch as much of the pro's warmup and preparation as possible. Most of what they were doing was similar to my own warmup, but it is clear that the level of professionalism is a lot higher, and these guys have it dialed down to the last detail.

Another interesting aspect was that the top competitors spent more time than I would have expected making up movement intensive boulders on the warmup wall. These comps are movement intensive from the first move, so this makes a lot of sense and I will be incorporating that into my warmup in the future. 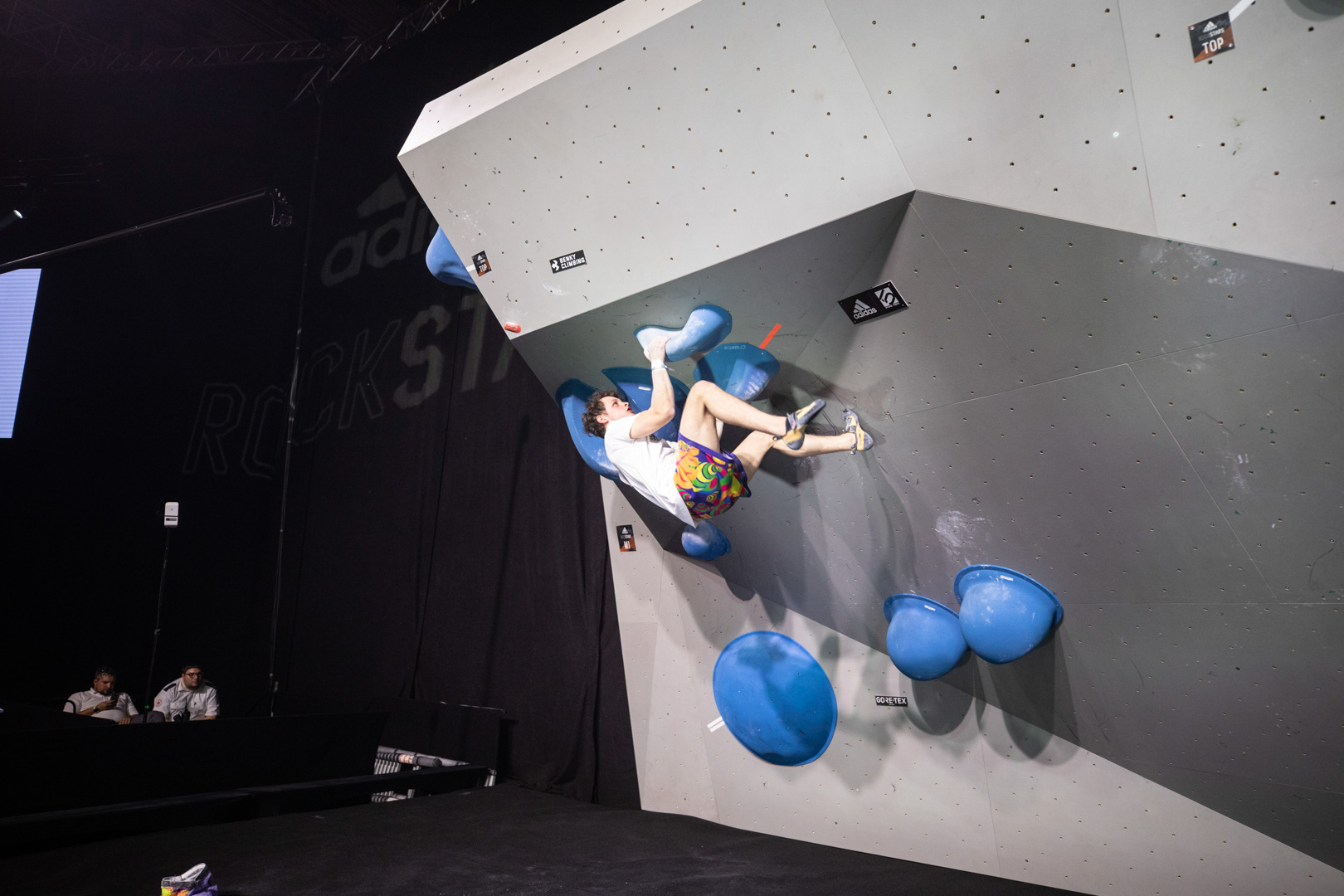 You came third in the T2R Final on Friday afternoon. Did you have any idea you’d wind up as the highest finishing T2R winner in the world, and even wind up making the top 10 in the pro comp?

Despite coming third in the T2R final, I felt like I had a little more to give in the semi. In the T2R final I was third by just a few attempts, and almost topped the final boulder in the last few minutes of the jam that would have given me the win.

I was incredibly happy to receive a wildcard, but wanted to show what I was capable of on the big stage the following day. I was certainly psyched to top the first boulder, but figured it would end up being pretty easy for the best in the world. As it happened, the round was even harder than I expected, and I was high up in the results for most of the round.

I have to say it was pretty absurd to be on the bubble for the final for so long and made the rest of the semi final pretty enjoyable top watch!

What was it like to walk out on stage for the first time in the ROCKSTARS semi-final? Can you describe how you were feeling before you made your way out into the lights?

Before I headed out I was just excited. I knew there was no pressure and that I just wanted to enjoy the experience as much as possible, and every boulder was a fresh opportunity for a top.

Walking out, I was focussed and in the moment and actually quite isolated from the crowd because the lights in front of the stage were so bright. It was only when I topped the first boulder that I really took the time to look out into the crowd and see how many people were there to watch the show. 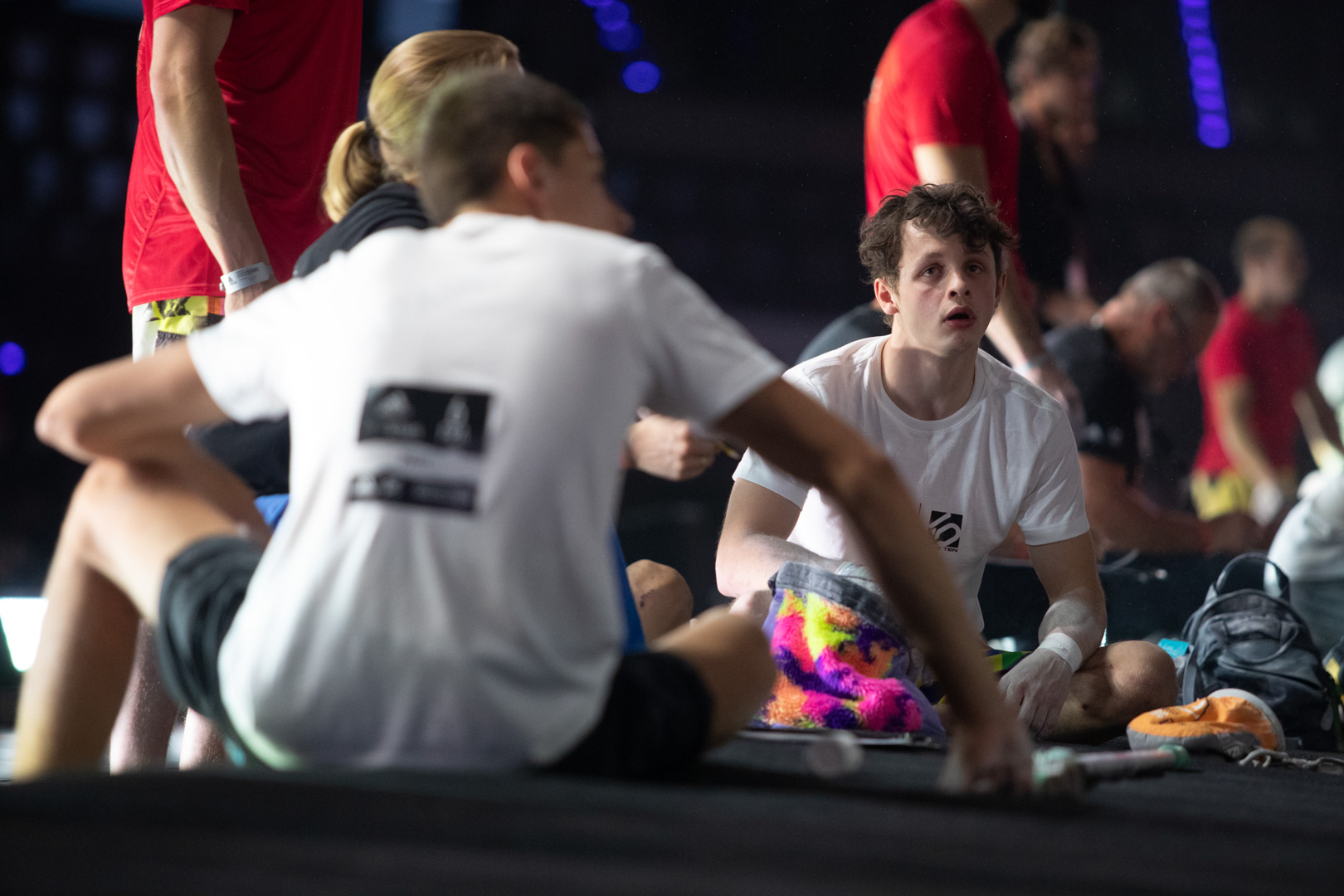 Tell us about topping the first men’s boulder? What do you remember about your ascent?

After falling on the last move on my first go, I looked around at the top hold from the ground and found that it was better than I expected. I knew I could do it from that, and took a long rest to ensure I gave my best on the next go.

The start moves felt much harder than the previous go, but I fought back through to the last move and was lucky enough to stick it. It actually felt pretty automatic, like I didn't really need to think much about the climbing and could just let my body do what I train so much for. That's a rare headspace to find and I'm excited that I was able to reach it on such a big stage!

As if that wasn’t enough, you were within one bonus point of a place in the grand final. How close were you to landing Men’s Boulder 4 and do you think you’d have gotten it with a little more time?

The rest of the boulders were hard, but I felt strong enough to make progress on the second, and almost made it to the bonus. It's hard to know what could have been different had I not made some little mistakes, but I'm taking it as an incredibly encouraging sign for the future! 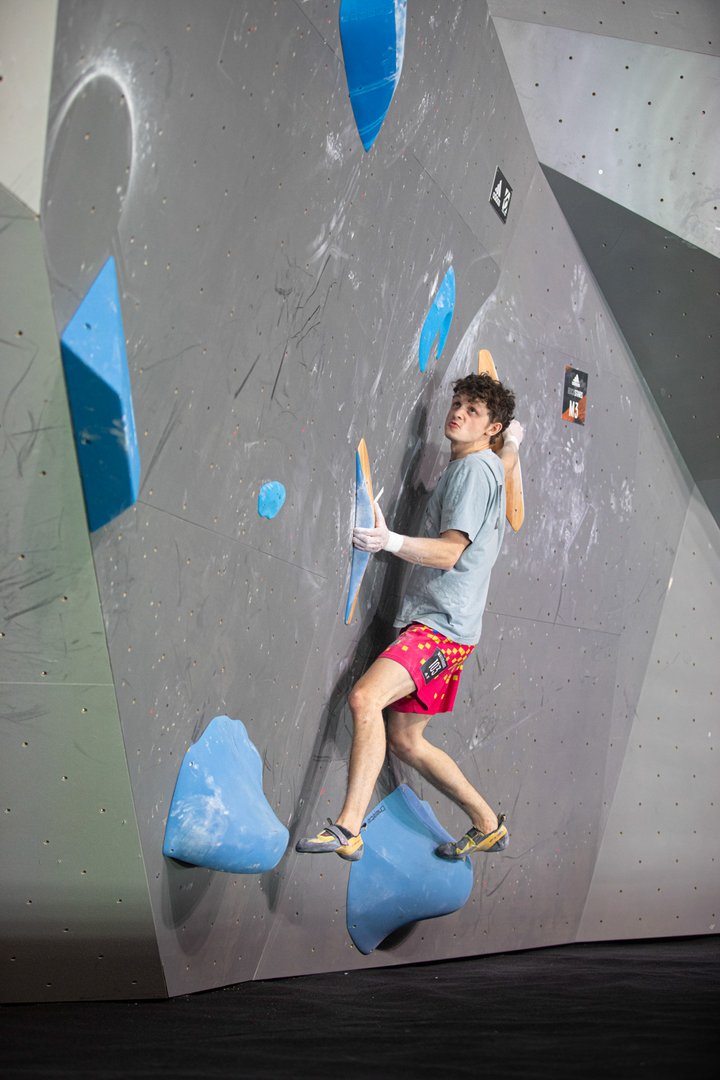 You stuck around to watch the grand final. How was it in the arena? Does it inspire you to want to go back?

Adidas certainly know how to put on a show! I have to say that I enjoy climbing in finals more than I enjoy watching them, but I had a glorious time watching the best in the world battle some sick boulders.

Climbing in that final is now one of my biggest goals in climbing, and it has inspired me to train harder than ever.

You were getting a lot of love from the announcers and the crowd last weekend (especially the visiting Hangar crew). Do you enjoy that kind of support or does it come with added pressure?

I love the support. People have come out for a show, and I always do my best to give it to them. I feel like I can channel the energy of the crowd to push even harder, so the more people I have behind me, the better I can perform! 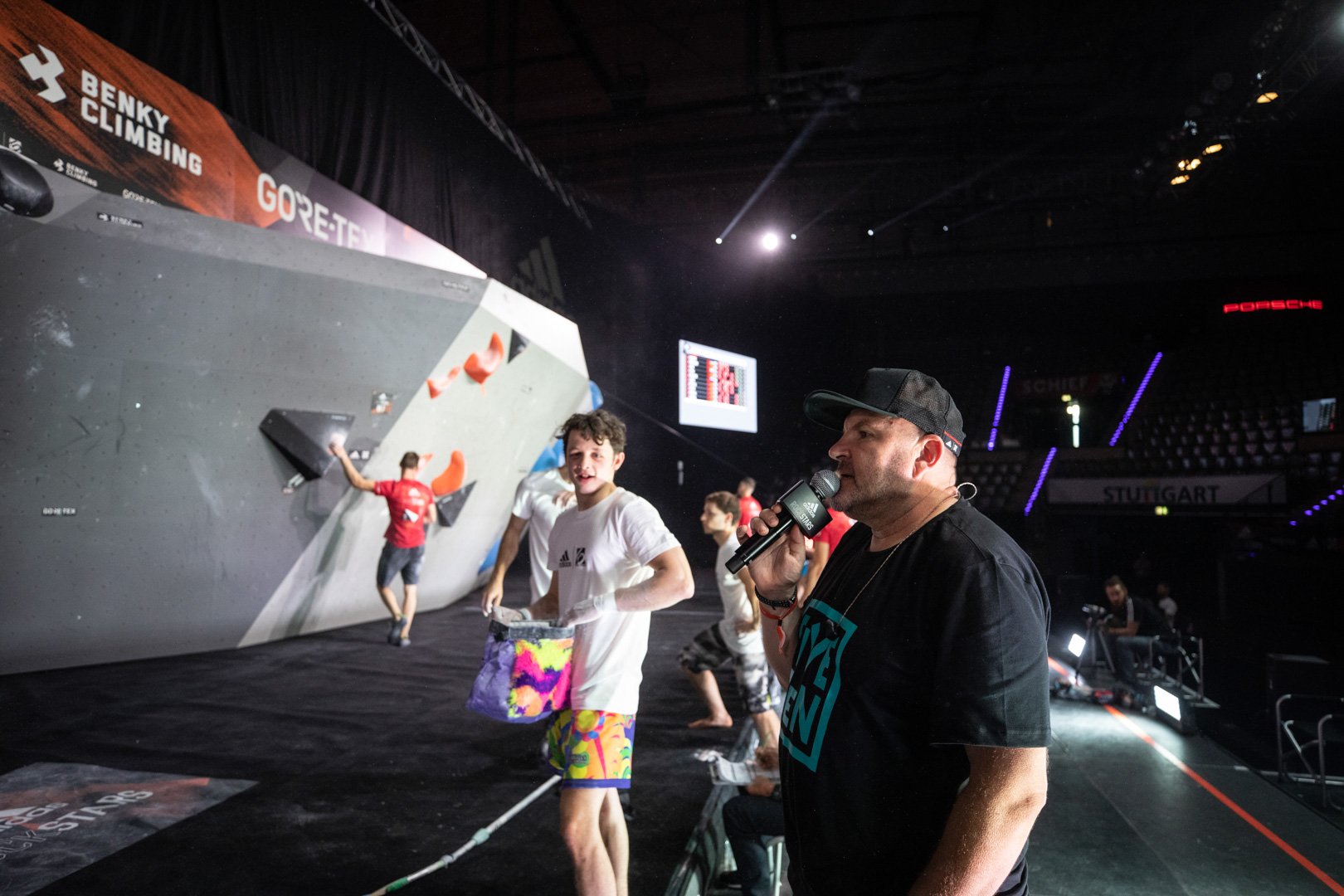 Finally, what’s next for Alex Waterhouse, now that you’re headed back to the UK?

Well this weekend I competed at the British Lead Climbing Championships, where I was lucky enough to take home third place.

This will hopefully open the door to possibly competing internationally next year, so I want to train as hard as possible over the winter to make that happen. For now though I'm going to take some time to climb outdoors and recover from a physically and mentally stressful summer of competitions before the next training cycle. 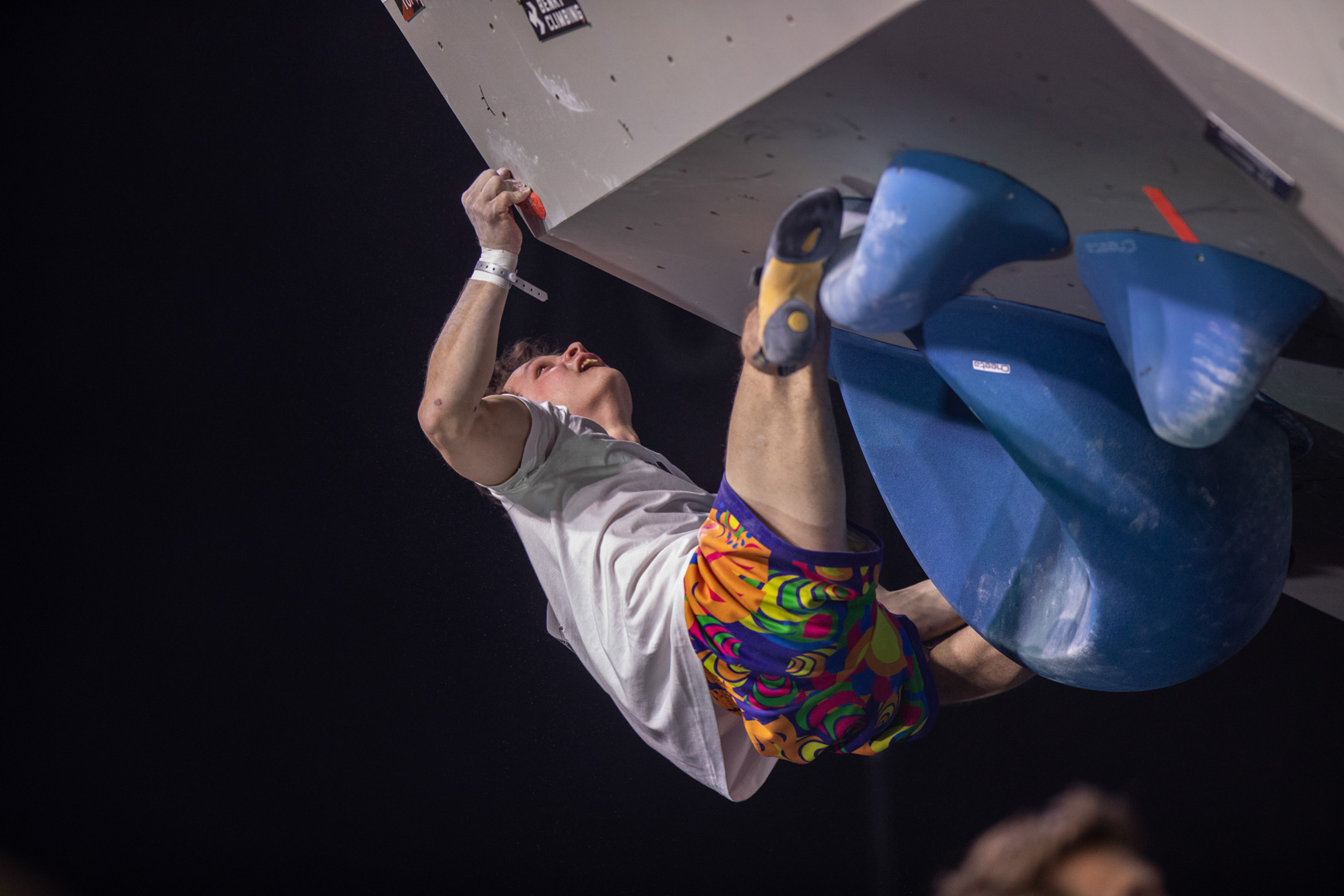 Winter is coming, and it's bringing a bunch of fun climbing comps to the Hangar.

We'll be launching our new and improved Winter Bouldering Series later this year, and we're also hosting the Christmas themed leg of the TOUR DE BIFF, at Hangar Liverpool.

The Beastmaker International Footless Festival is the world's premier campus climbing contest. With Tour de Biff, you can sign up to take part in the wild climbing action for yourself.