Climbing and bouldering can be broken down into two sides of the same coin, the physical side and the mental.

The physical side is easy to train. You do some climbing or you hit the gym, maybe you follow a training plan, but the knowledge is out there and at its core the philosophy is simple, you try hard, you do another rep, you keep at it.

The mental side, however, is a different story. Sometimes it's not as obvious that it's the thing holding you back, and mental training is shrouded in much more mystery. How do you train your mental state? Is it something you either have or you don't? Is it an innate ability to ignore your brain saying "this is a bad idea" and do it anyway? Or is it something you learn to control? 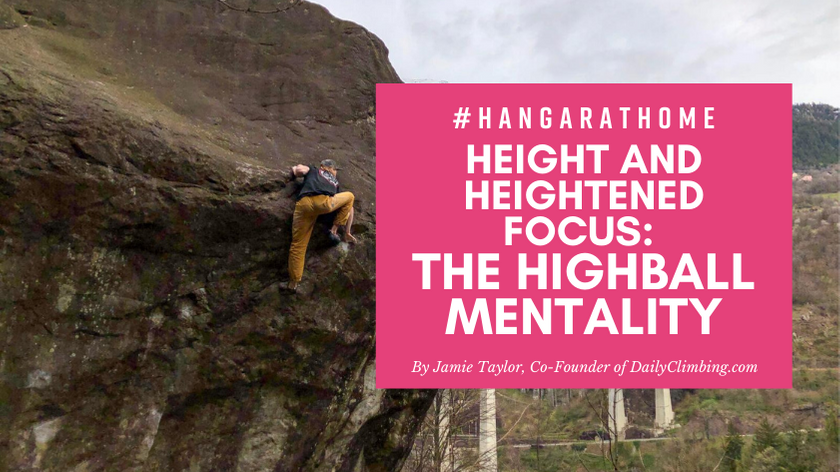 Highball bouldering takes this 'bad idea' and runs with it. A highball boulder is a boulder problem that is anywhere between 15ft - 55ft. To give you a sense of scale the average bouldering wall is 10-15ft, which means the larger highballs can be 5x as big as your usual climb at the gym.

For most of us, the physical side is the hardest part of bouldering, you can't hold that crimp or maybe you’re just not strong enough. For boulderers attempting highballs, mental focus is just as important as physical strength. On each highball boulder there is a point that once passed, it's no longer safe to fall.

This is where your mental state comes in, that ability to keep it all together, take control of that fear and push past it. Nina Williams is an expert at this. She's known for her terrifying accents of highball boulders and made a name for herself by being bold.

A recent Reelrock shows her making the accent of Too Big To Flail (V10) a famous 55ft highball in the Buttermilks. The film gives us an insight into the preparation, determination, and skill required to climb these behemoths.

While each climber's methods differ, Nina prefers to top rope the problem first and imagine herself doing the climb without the rope. This helps immerse her in the fear, so when the time comes she can acknowledge it and control it.

But the important thing to take away from the film is the glimpse at the preparation that you don't see in a lot of the climbing movies or first ascent videos we see online. Sometimes it's easy to forget that the pros don't just effortlessly tick off their projects one by one and years of mental and physical training culminate into each victory.

In Nina's case, that consisted of falling again and again on smaller highballs to build up her confidence and teach her the importance of falling correctly. She trained her mental state little by little, with each failed attempt building armor against her negative thoughts until she could control them when needed.

So by now you're probably wondering why do they do it?

The motivations are a little too complex to sum up in a few sentences, but the motivation of a highball boulderer tends to be the same as free solo climbers. These days it can be hard to tell where a highball ends and soloing begins. In fact, most of them take part in both disciplines of the sport. Take Alex Honnold, for example, he made the first ascent of too big to flail and is now possibly the most famous climber in the world due to his dangerous free solos.

Most of the climbers are looking to push themselves and the high stakes allow them to dial in and focus completely on the climbing. They all refer to something called the state of flow; it's a complete immersion in an activity that allows them to problem solve extremely quickly, which leads to very efficient climbing.

Another common drive is the feeling of perfection, knowing that the sequence has to be perfect or you're at risk of dying or at least changing your life forever. The added pressure brings greater feelings of accomplishment.

So while we all might not be attempting 50ft boulders graded in double digits, it's still important to train your mental state and ensure you don't lose your cool when your own challenging situation arises.

If you are interested in watching Nina Williams climb too big to flail, I highly recommend it, you can find it here.

Article by Jamie Taylor. On the rare occasion that Jamie isn't climbing, you'll find him putting his heart and soul into a website called Daily Climbing, where he and a fellow climbing enthusiast talk about everything related to rock climbing and bouldering. https://www.dailyclimbing.com.